Ok - so, I'm going to try to start blogging on a semi-regular basis and try out Zenfolio's blogging platform. I've tried others, but hopefully using one platform will help me do this more regularly.

For this first post, I am sharing some photos I took on a weekend in Shenandoah National Park. For those who know me, I have a HUGE love of the outdoors, but haven't been able to find time to get out of Washington very often. Well, I'm trying to do that more and with Shenandoah only 2 hours away, it seemed like an ideal place to go for a quick camping trip.

With forecasts of thunderstorms, I wasn't sure what to expect. Instead of showers, though we got perfect weather all weekend.

I went with my friend James and we left DC around 6pm on Friday and drove into the sunset (stopping at IHOP for breakfast-for-dinner along the way), finally arriving in Shenandoah after dark, pitched our tents and went to sleep - or tried to. There was some insect that was LOUD. It wasn't a cicada, but regardless, I found myself wishing I had brought the earplugs in my desk drawer from home.

The next morning, we woke with the sun - around 6:30 and decided to go for a drive until the Wayside (read coffee) station near the camp opened at 9 (my car is pretty dirty right now thanks to all the construction going on in my apartment's garage). 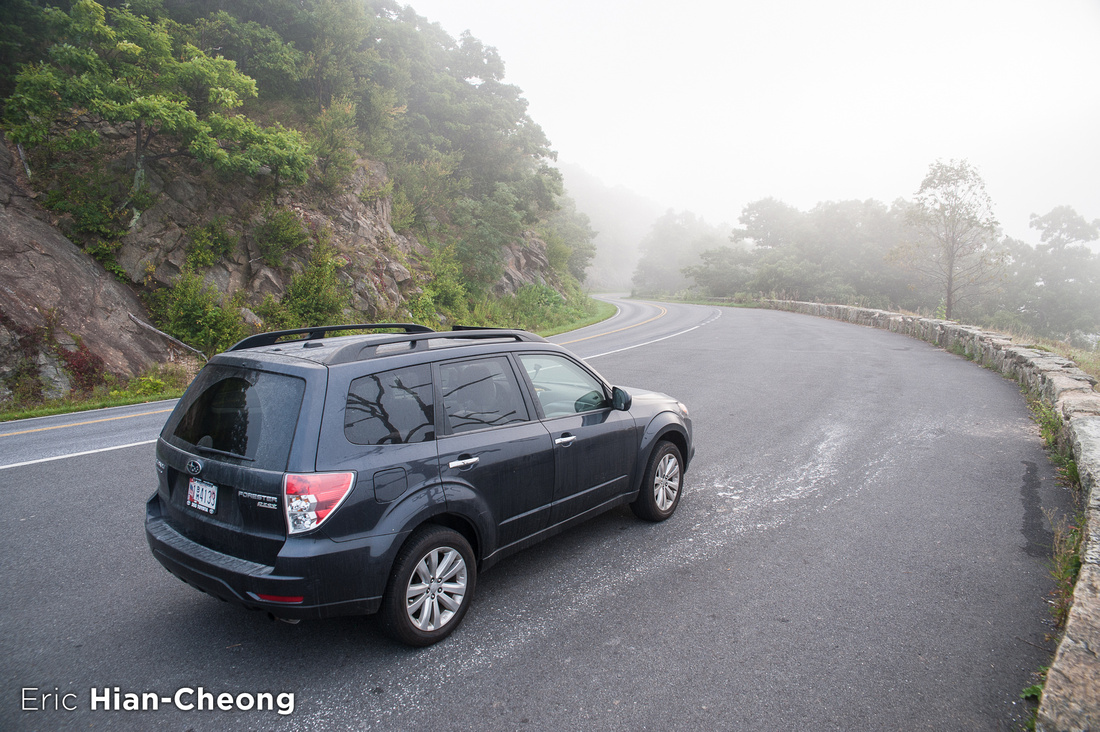 We drove out of the campsite North along Skyline Drive to see... well, lots of rolling fog coming up the mountain which made for some neat photos of ghostly trees in the morning mist. Somewhere out in the fog, a woodpecker's drilling echoed across the unseen valley. 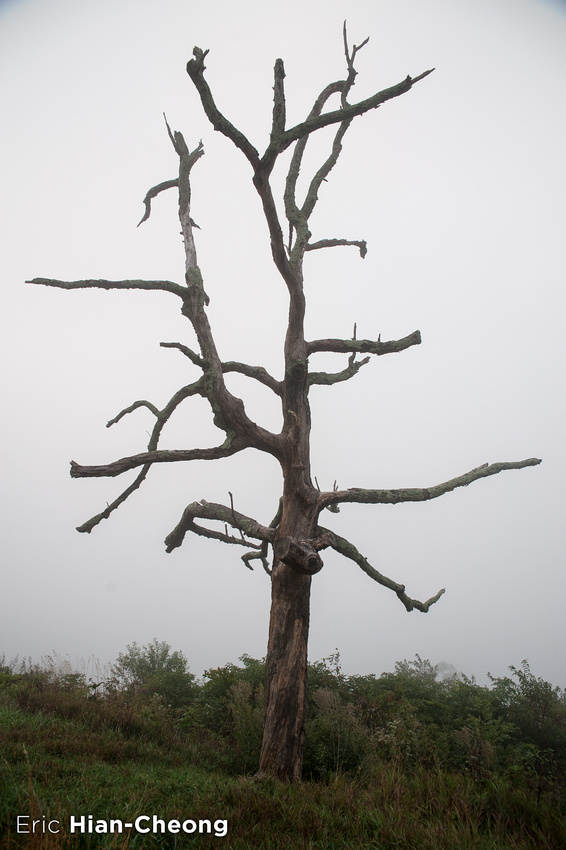 When the fog finally started burning off around 8:30am, we were treated to some pretty good views. 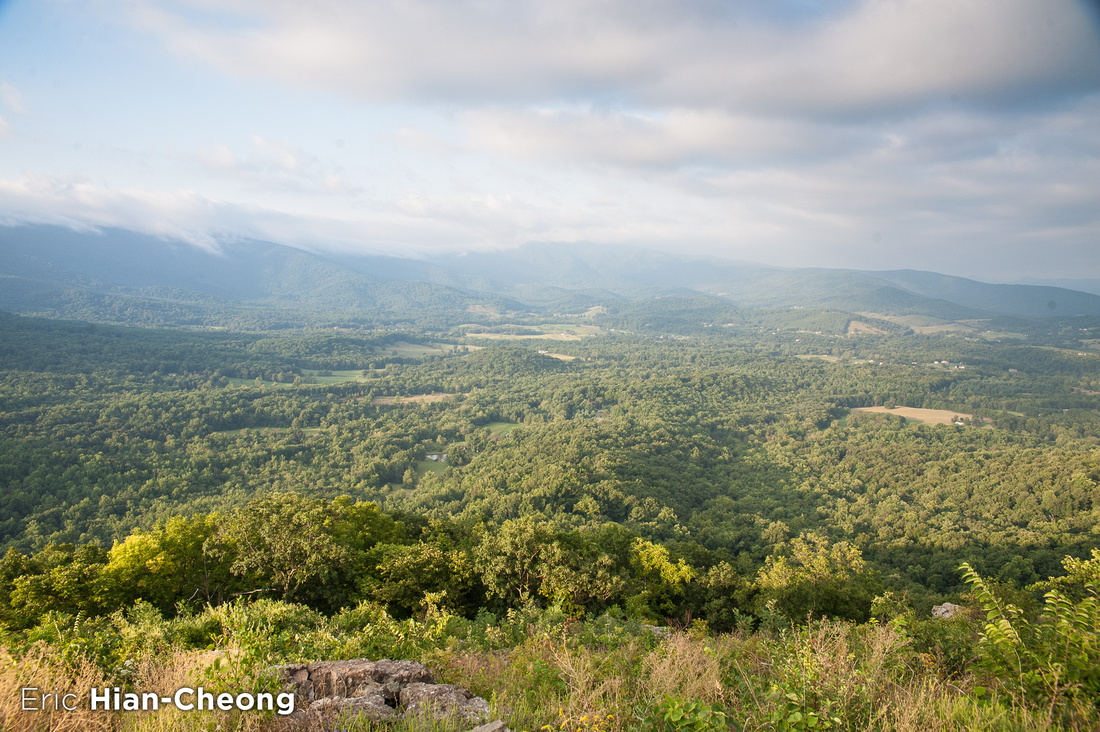 After stopping at the wayside to get our caffeine, we set out on the Overall Run trail that leaves from the Mathews Arm Campground. Its a nice hike that takes you down a hill to some waterfall overlooks. Unfortunately, the park hadn't seen much rain and the falls were pretty dry. Still, though, the views were great (if a little hazy) and the weather was as good as it could be. 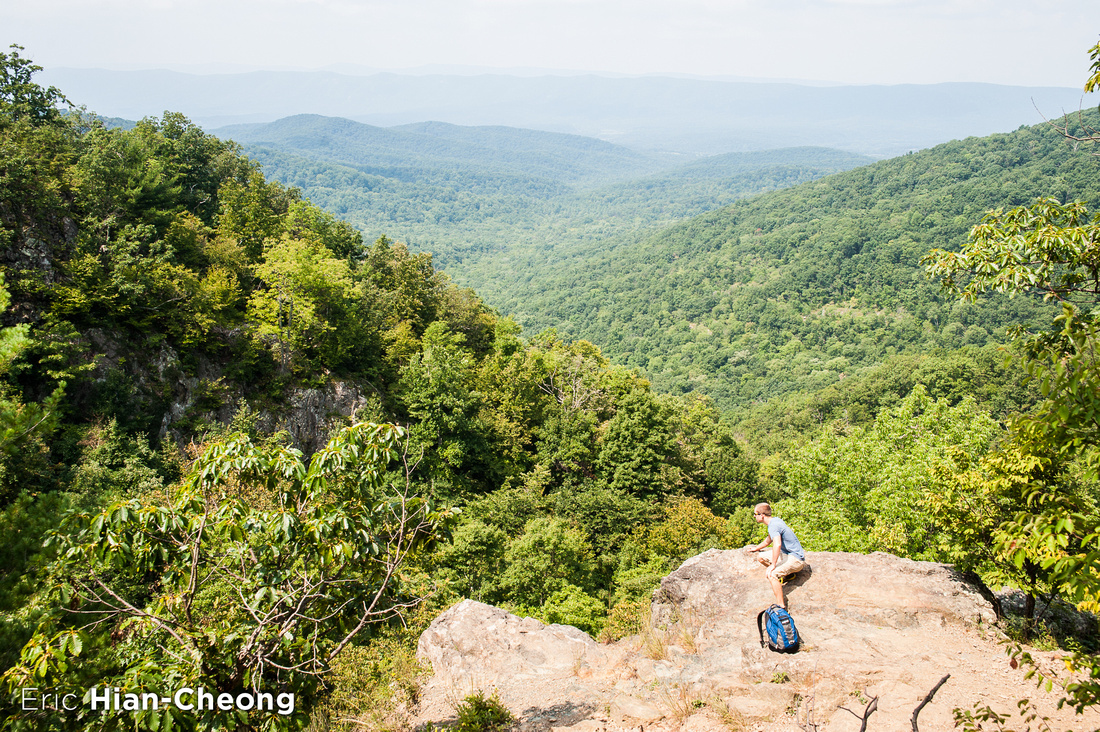 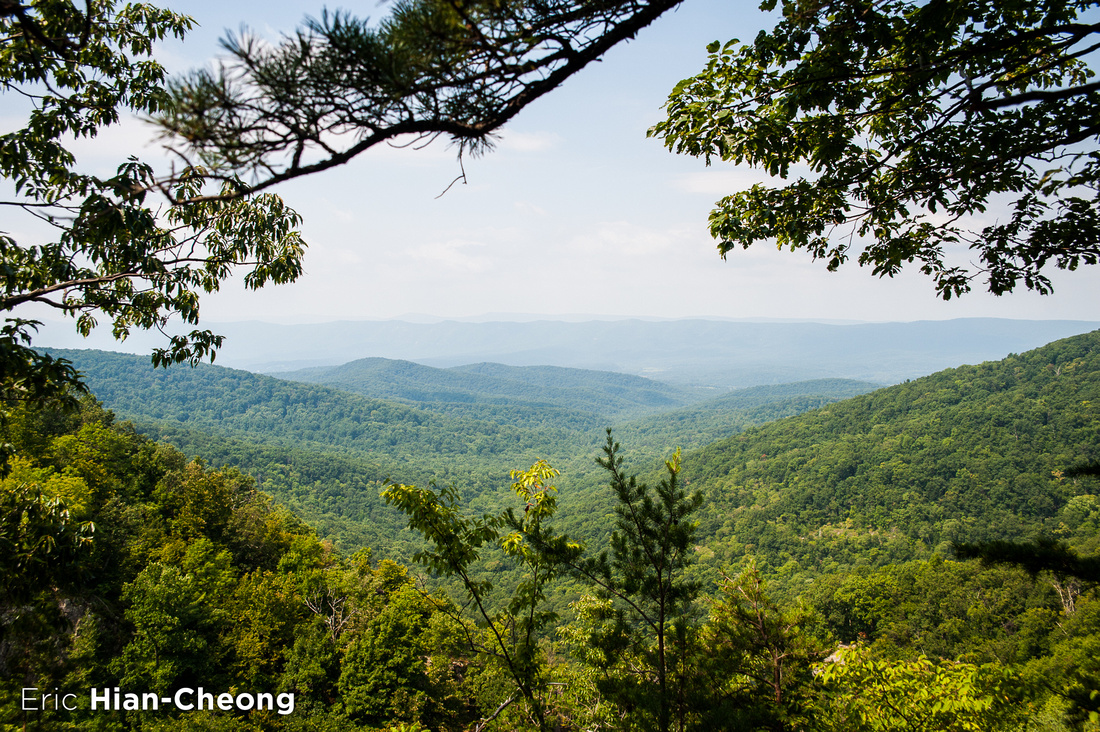 We continued down the trail until it leveled off. At this point we decided we should probably turn back since it was not clear how much further the trail went and what the terrain ahead was like. It was around 2pm and we hadn't been able to get a good trail map (I had tried three stores none of them had a topographical map of the park). So back uphill we went. 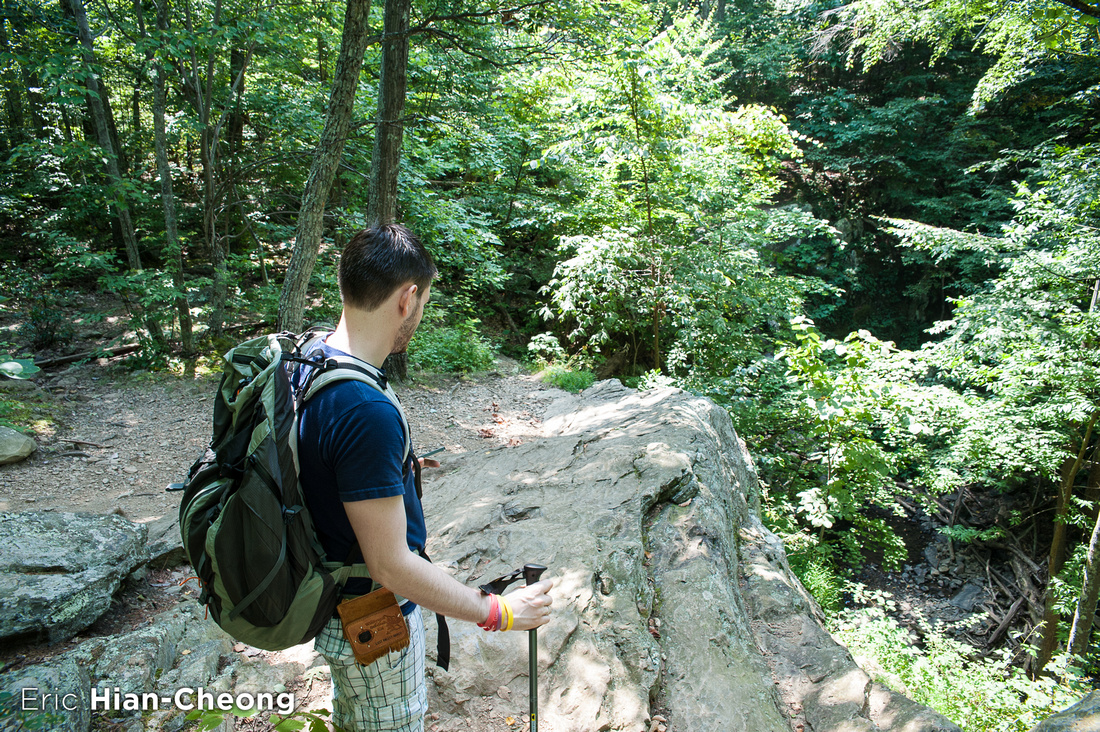 One of the points on the trail that normally overlooks a stream. Little rain had fallen and the riverbeds were pretty dry. 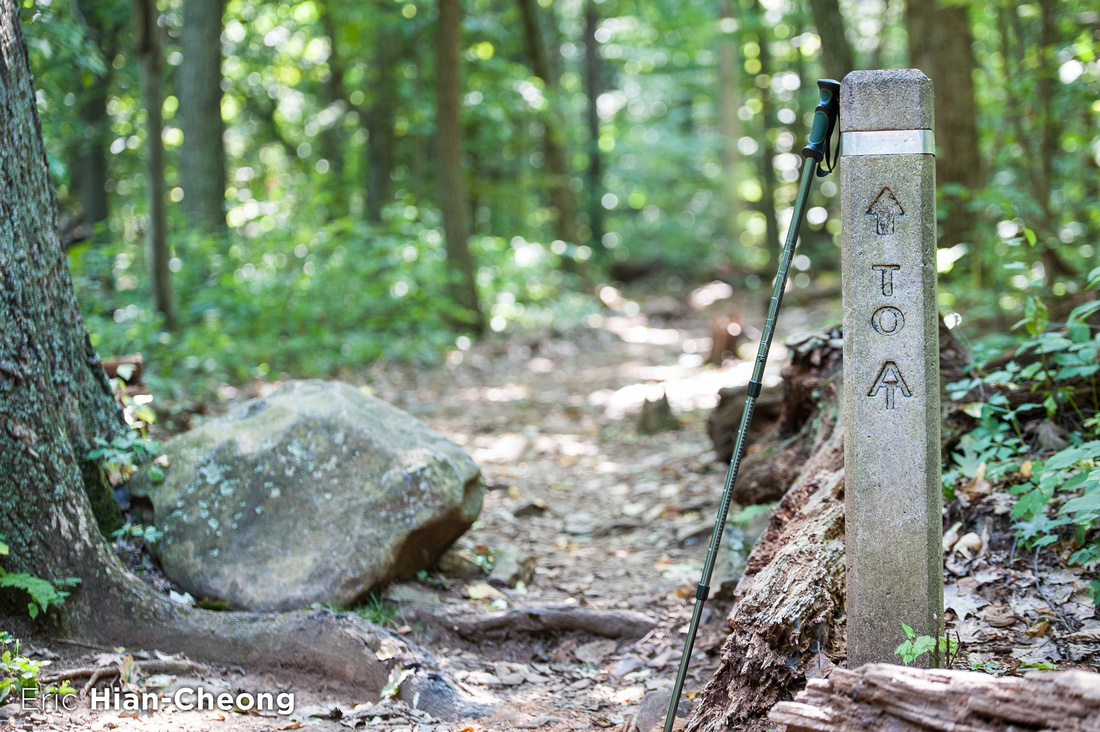 After returning to the campsite, we took a drive 35 miles south to Big Meadows to check out the visitor center. We finally got the map we were looking for and then picked up some hot dogs, buns and beer for dinner. We got back to camp, built and fire and just hung out until dark. The fog started rolling in again, but I was able to get one photo of the stars by laying the camera on the roof of my car. The milkey way was just barely visible. 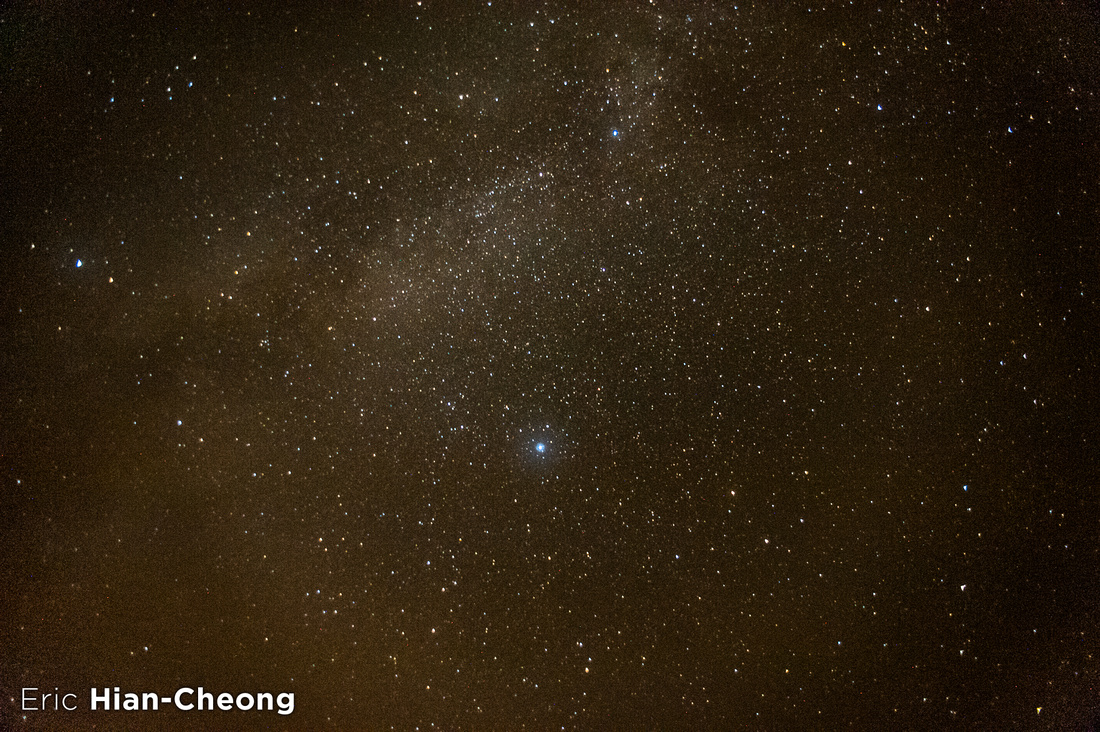 The following morning we broke camp before heading to a short 3 mile hike up to Mary's Rock near Thorton Gap. At the top was a superb view of the valley below perfect for a panorama stitch.

For my first trip to the park, I think it was overall a success. I plan on heading back in early autumn when the trees start changing. Hopefully there will be another post!